During the 10 plus year production run of the Vanagon several trims and models were released and marketed. A comprehensive list is displayed below with more detailed descriptions of the key models below that. 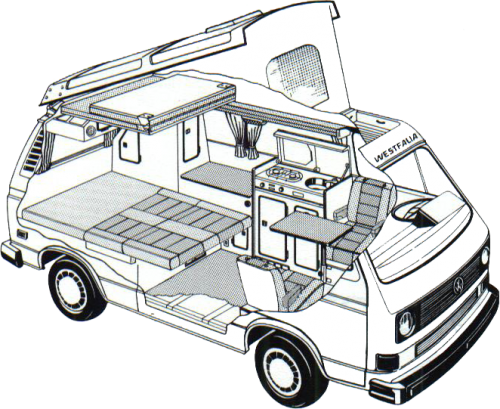 Westfalia pop-top campers were special models of the Vanagon that were manufactured and marketed throughout the life of the Vanagon.  They are the most common Vanagon Camper, and include a pop up roof with bed, refrigerator and stove. They also feature a pop up table in between the front seats and a lay down rear bench for a bed.

The Westfalia Vanagon camper is a full scale Class B motorhome with accommodations for four adults.  The top end for the Westfalia model was the Wolfsburg Edition Westfalia Campers which had all available options. 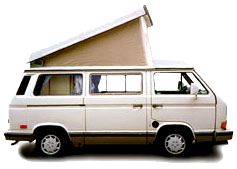 The Weekender version was also made by Westfalia but lacked the fridge, propane stove and sink with on board water supply. Instead versions were offered with removable cabinet, 12V cooler and self-contained sink.

The Wolfburg Edition of the Weekend made in 1984 featured a rear bench seat and two forward facing middle seats. The bench seat still folded down to make a bed and under it was a storage compartment and rear heater.

Syncro 4X4 model Vanagons were first introduced in 1985 and were produced through the end of the Vanagon generation. They were few in numbers and even more rare in a camper configuration. Syncros were fitted with a four-wheel drive system, shorter wheelbase and a 48/52 front to rear weight distribution.

Anything else to add?  Let us know below….

Listed below are the various names the Type 2 (T3) van was given around the world.

Use the search box above to filter our listings by features, specs or other unique criteria. You can also browse our newest posts by model year or location by using the links below.